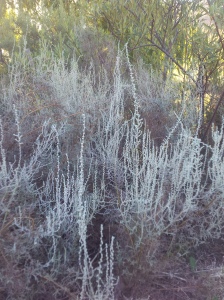 Snake Bush, Grey Bush. Khoi Bedding Plant. Names not really suited to this interesting member of the  Daisy Family, although its Latin binomial is slightly better “feathery serif” is closer to the mark.

“The origin of the word serif is obscure, but apparently almost as recent as the type style. In The British Standard of the Capital Letters contained in the Roman Alphabet, forming a complete code of systematic rules for a mathematical construction and accurate formation of the same (1813) by William Hollins, it defined surripses, usually pronounced “surriphs”, as “projections” which appear at the tops and bottoms of some letters, the O and Q excepted, at the beginning or end, and sometimes at each, of all.” The standard also proposed that surripses may be derived from the Greek words συν (together) and ριψις (projection) … The OED speculates that serif was a back-formation from sanserif. Webster’s Third New International Dictionary traces serif to the Dutch noun schreef, meaning “line, stroke of the pen“, related to the verb schrappen, “to delete, strike through“. Schreef now also means “serif” in Dutch.”¹

I have seen this plant many times but never stopped to really LOOK. I spent some proper time with ‘her’ (… it is a feminine plant) in the Hemel-en-Aarde Valley.

This is a fynbos plant that is quite common and conspicuous for its beautiful grey-green to light grey – silvery foliage. On mismanaged or overgrazed fields or disturbed places it can take over and be hard to eradicate. It is a member of the Daisy Family (Asteraceae) and so it is a natural wound-healer: covering and healing disturbed places, often surviving where not much else can. My sense is that in the body it will also act as a wound healer and it will do this by spreading into the area, meshing together, densifying and drawing the required substances up into the area for use. It definitely has meshing and drawing up qualities. This also fits with the origin of ‘serif’ – together and projection. Its growth reminds me of the wound-healing processes of laying down of  collagen, formation of the extracellular matrix, epithelialisation and contraction. As such, it may be useful for the later stages of cicatrisation, once the inflammation has died down. Perhaps also for old, problem scars. Places where the tissue is tough and devitalised, where Seriphium can draw up nutrients and circulation from below  into the tough, ‘grey’, devitalised tissue.

The flowers of the plant are very small and nondescript, having a brownish appearance, with purple sexual parts. The plant is overall very contacted, the leaves being contracted right down, giving the plant a very stem-like appearance. Stemming is the major principle here, with some evidence of pointing. This means that the Earth element is extremely predominant, with some Fire, but very little evidence of Water or Air element actions.

This plant appears to be predominantly forged between strong, hard, earthy, upward forces fiercely tempered by fiery solar forces. Perhaps this earthy plant is particularly sensitive to solar radiation and has learnt to protect itself in its harsh environment by contracting and covering itself with silvery grey hairs. It hasn’t succeeded entirely – the flowers have been ‘burnt’ right back and elements of the flowering principle (aromatic taste, scent, volatile oils) have been pushed back down into the leafy region, giving the leaves and stems flower-like qualities and almost certainly medicinal properties. The harmonious 1:1:1 proportions of flower/fruit : leaves/stem : roots have been disturbed here to a 1:5:5 ratio or similar: this plant is mostly stem and root. Alternatively, the lack of water and therefore water element expressions show this plant’s knowledge of how to survive in dry, ‘waterless’ conditions.

After chewing the herb:

Awareness of spinal column and the Du Channel (Governor Vessel Meridian) travelling up my spine and over my head to the point between my two eyes.    Feel very heavy.  Feel earthed. [comment: seems to have a vertical axis of symptoms – fits with upright growth habit]. Sweating slightly – mild diaphoretic effect; feel warm. Irritation to and dry sensation in  the top of the pharynx, with desire to clear throat.

After chewing the herb and sleeping with it:

Tense, slightly anxious. Restless, disturbed sleep, having to change sides frequently. Woke early, before dawn and could not get back to sleep. [this is interesting in the light of the use of Seriphium as a bedding plant – possibly homeopathic to disturbed sleep]. Also, mental image of long, stiff strands of Seriphium like long bony fingers pushing there way into things.

Beautiful. Elegant  Graceful. Upright.  Contained; self-contained. Silver and pearls. Candelabras and trident. Delicate yet contracted, hard. Seems delicate, yet is tough as nails. She is the uptight, upright (straight-backed), tough-as-nails spinster great-aunt with her silver hair in a bun.

My sense is that this plant is possibly an Asteraceous analogue of the homeopathic remedies Platina and Palladium. Particularly Palladium: cf. “keeping up brightly in company” and silver series.